We've added a Rescue Media Builder (RMBuilder) application with support for Windows Recovery Environment (WinRE) as well as the existing PE environments supported by Reflect 7.1 and earlier. WinRE supports WiFi and is available on most |Windows installs without any further downloads.

Our original implementation of real-time block changes erred on the side of caution by resetting the tracking index whenever a volume was mounted. This meant that after Windows reboot an image was required to be created on a volume without using CBT before the benefit of CBT was available.

We've improved on this by reliably detecting whether NTFS volumes have been mounted without the CBT driver in the kernel stack. This applies to all Operating Systems that can mount NTFS volumes, including Linux. The operation of CBT has also been vastly improved by tracking changes in RAM rather than by flushing to disk. This also has a fail safe method to reset the CBT index should a power failure or other problem occur.  We're confident that this implementation is class leading and robust.

With that said, we understand that some customers prefer not to monitor changes over a mount/reboot so we've added a check-box to make CBT behave in a similar way to the current (v7.1) implementation....

MIG is now Windows kernel only!. Our Macrium Image Guardian (MIG) feature has been improved to remove the dependency on a Windows service and we've added popup notifications when a blocking event occurs. The popup shows blocking activity as it happens.

We realized that many of our Free Edition users are unaware that there are additional features available in the trial and paid for versions of Macrium Reflect. All 'premium' features, such as Image Guardian, Changed Bock Tracker, Incremental Images, Encryption.. etc..can now be activated and trialed for 30 days. After 30 days a further 7 day extension is offered. On expiration of the trial the functionality Macrium Reflect reverts to the Free Edition and Premium features will no-longer be available.  We've tried to make this process as seamless and unobtrusive as possible without losing any of the functionality of Macrium Reflect Free.

Recent history has shown that the current method of requiring Macrium Reflect to be running to alert of updates has proved ineffective. We've now added a systray icon in Window notification area to alert when an update is available to Macrium Reflect.

We've noticed that some customers have frustratingly been unable to extract files from backup sets where at least one backup file in the image chain is broken or missing. We've now added the ability to attempt to browse a backup set that contains missing files.

When browsing an incomplete set you will be prompted to continue with the mount:

Customers with PCs and Servers that have multiple users, especial Windows Terminal Server customers, have complained that non-Administrators can interact with and cancel scheduled backups. We've now add an option to restrict ReflctUI.exe and REflectMonistor.exe to only run for users in the Administrators group.

The default for password protection is now AES 128 Bit.

Previously the default password option was to exclude ecryption from backup files and images. To improve security we've now made the default AES 128 bit.  As before, you can increase this to 256 bit or disable AES if you wish.

The 'Delete' functionality in Reflect is now available when 'Browse for an image file' is selected.

Previously the 'Other Actions' > 'Delete File' menu was unavailable when 'Browse for an image file..' was selected in the 'Restore Tab'... 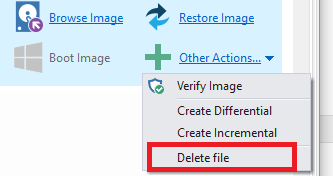 This functionality is now available.

To prevent multiple backups running at the same time and conflicting with VSS and I/O operations on the source or target it's only possible to run one backup at a time. Simultaneous backups backups are 'queued' and run asynchronously.  With v7.1 and earlier the Backup Running Mutex, that prevents other backups from running. was held open while the backup dialog was open, even if the backup had finished. This could lead to a 'stall' in sheduled tasks if and interactive backup wasn't closed at the end. This has now been corrected and the next backup will start as soon as the current backup has completed.

ReflectMonitor is a standalone exe that communicates via IPC to the running Reflect application to duplicate the backup dialog when backups, clones or restores are running. We have made the integration tighter to prevent some of the progress bars and other glitches that previuosly existed.

Server Plus copies backup data to a 3TB virtual NTFS file system. Some customers have experienced backup failure if the size of the backup data exceeds 3TB. We've now made the virtual file system size dynamically based of the amount of data and size of the source volume to overcome this problem.  We've also improved the error messaging on backup failure to make it easier to troubleshoot problems.

BitLocker drive without a drive letter

On systems with unlocked BitLocker drives that aren't assigned a drive letter, a 'BitLocker Live Restore' would always perform a 'Full Copy' restore rather than a 'Rapid Delta Restore (RDR)'.  This has been resolved.