Reflect 8.1 uses a new pipelined parallel processing implementation for reading, writing, and processing of data such as hashing, compression, encryption etc by maximising the available system resources. This highly scalable implementation vastly reduces the overhead and drastically improves the speed.

By doing so, resource utilisation by Reflect will increase, for example Compression and Encryption tries to use all the CPU cores. The user can control the resource/bandwidth allocations for Macrium Reflect to prioritise other applications.

There may be no speed improvement if the same target storage with v8.1 was a bottleneck when imaging with v8.0. This could be true for network and USB connections.

The screenshots below show the time taken to complete a backup of the same disk using 8.1 and 8.0 imaging modules. 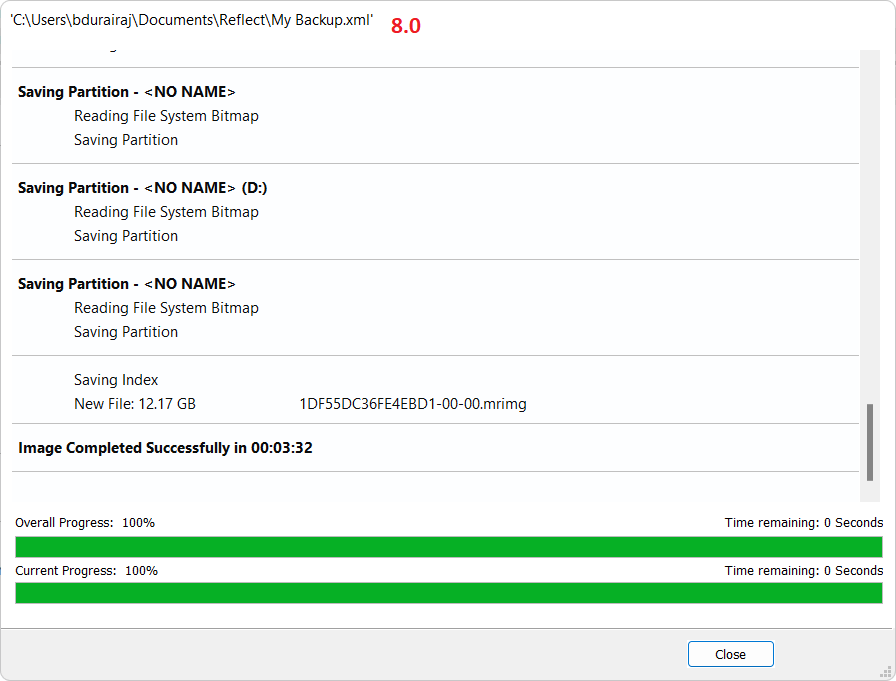 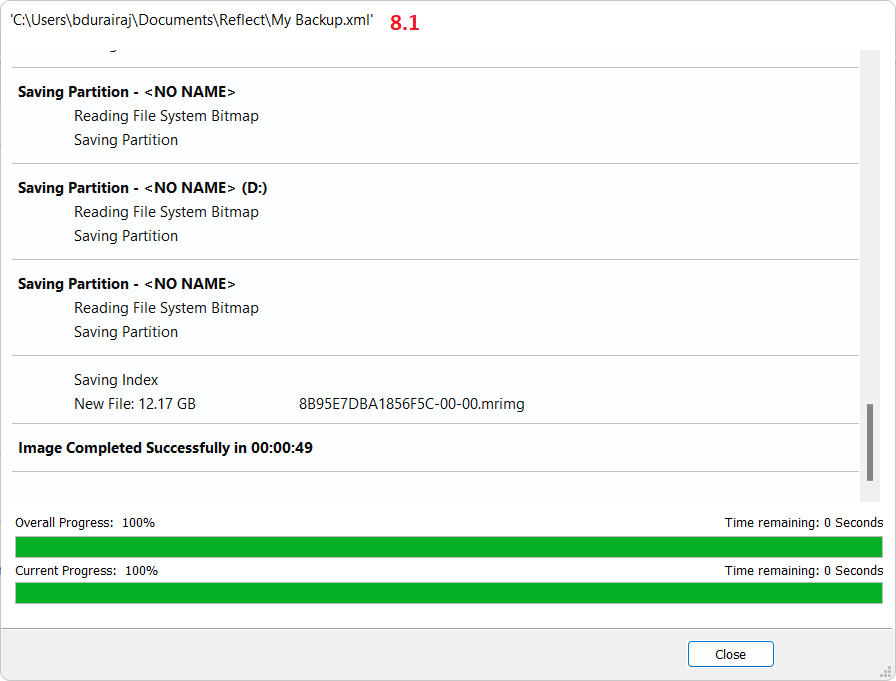 Interactive backups can now be run in the background.

Reflect 8.1 adds a new option to allow backups to be run in the background therefore allowing users to continue using Reflect GUI to perform other tasks. Restarting Reflect will show any existing background task status.

The new option can be accessed at various stages as detailed below.: 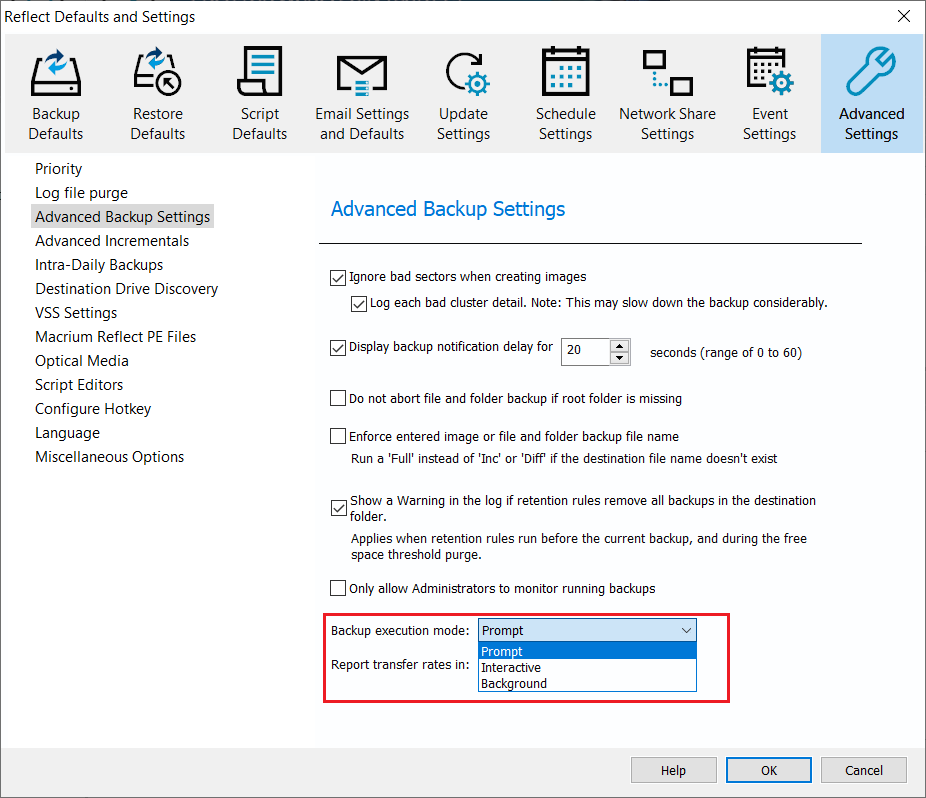 By default, it is set as Prompt which means an option dialog below is prompted whenever users try to run an existing backup definition file via Run Now option. Changing it to Interactive or Background makes the backup run interactively or in background without any prompt. 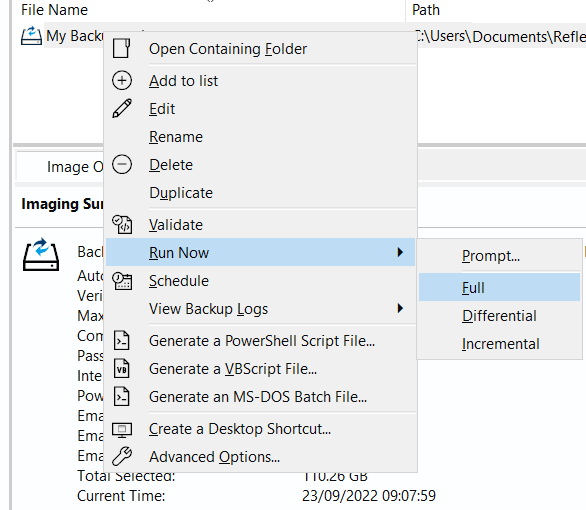 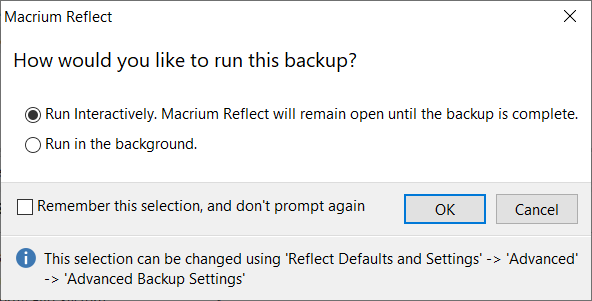 User can selectively override the option by selecting Prompt option from Run Now pop-up menu above. In this case, an option is shown and user can select whether to run interactively or in background for once. Selecting, Set as the default execution mode will sets the selected option for all the tasks, and will have the same effect as settings in Other Tasks > Edit Defaults and Settings > Advanced Settings > Advanced Backup Settings. 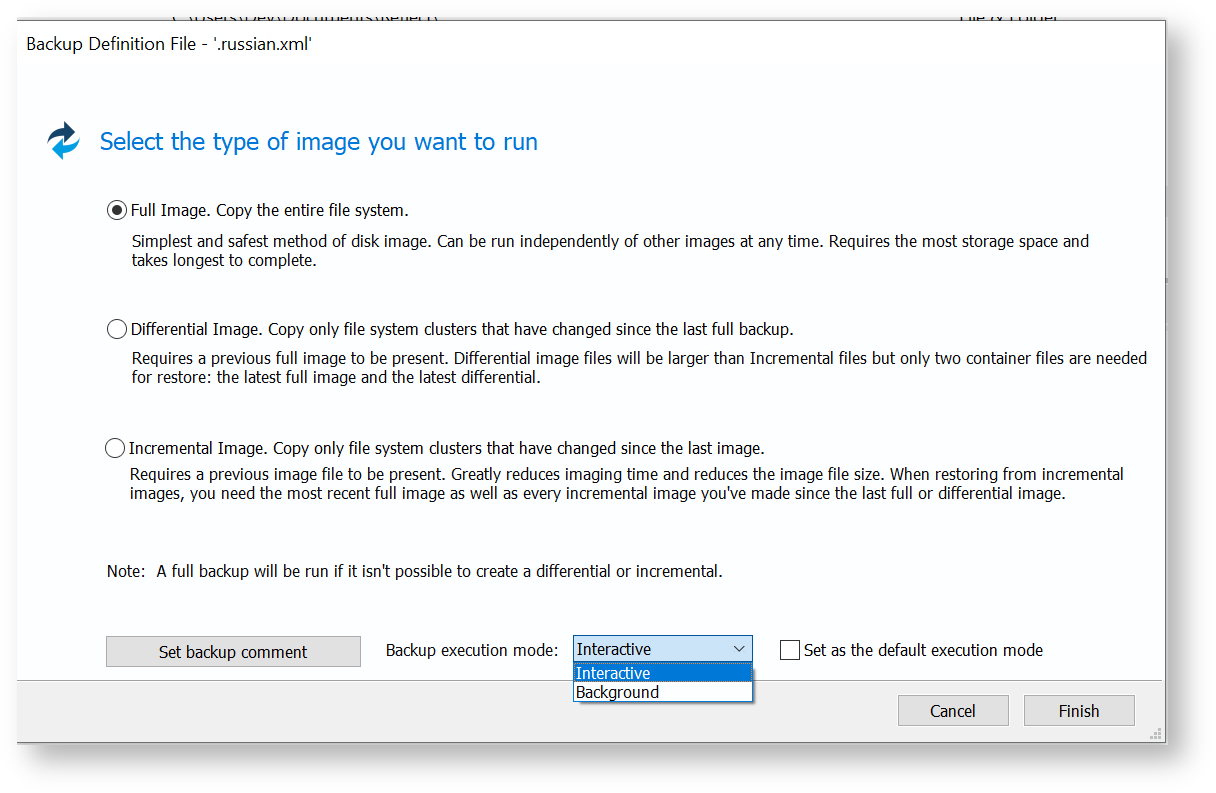 The option is also available when creating backup definition file and only honoured once. 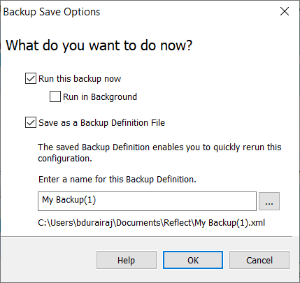 A new Task Status tab has been added and remains shown once a backup is selected to run in the background.

This new feature allows multiple backup jobs to be queued. A new unified Tasks tab shows list of active Scheduled backups and user run background job all in one place 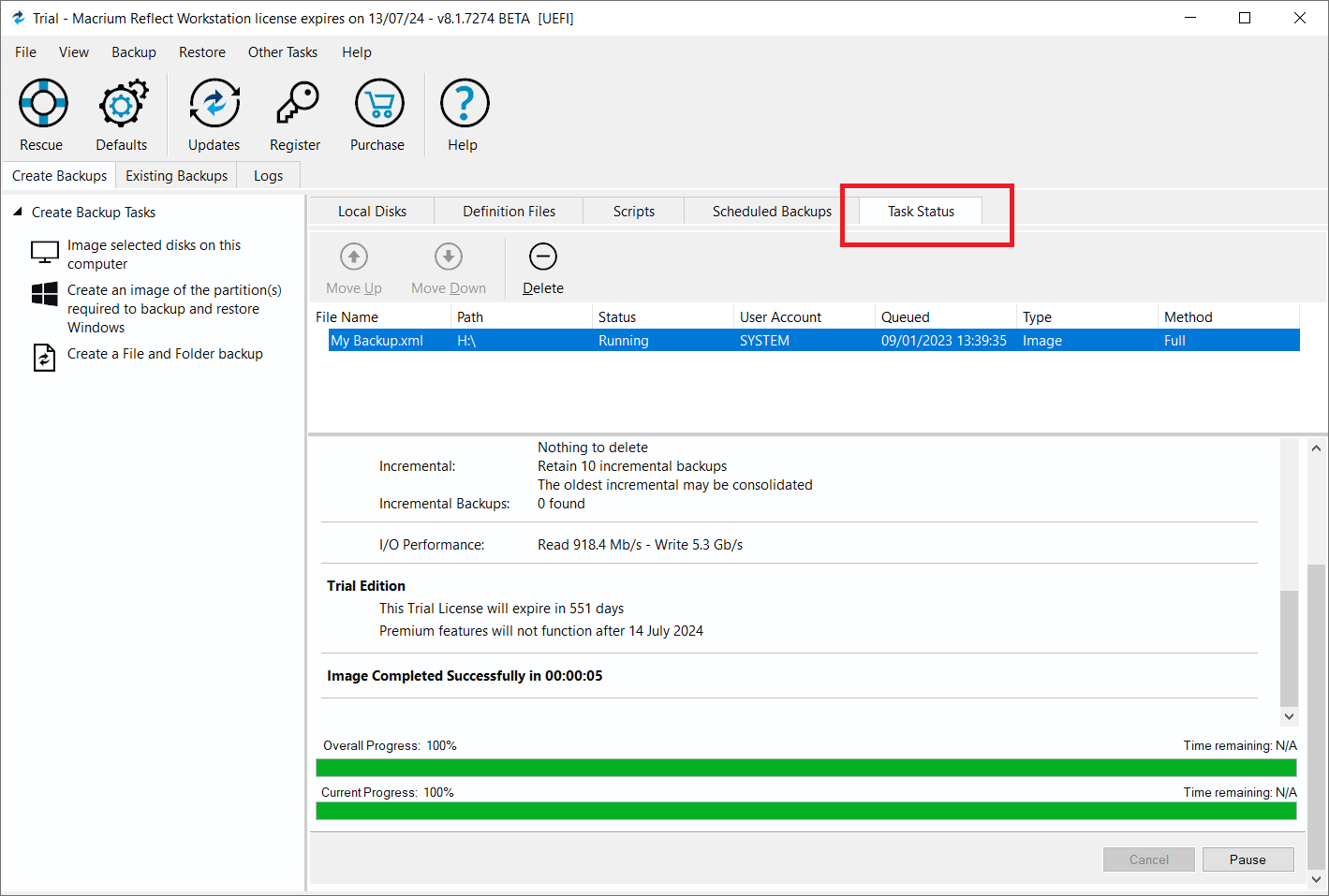 Tasks can be moved in the queue using the 'Move Up' and 'Move Down' toolbar buttons and context menu.

Use the 'Delete' button or context menu to remove a background task from the queue.

A default rate limit for new backup definitions can be set for writing to the destination. This will limit the write rate to a specified number of Mb/s (megabits per second). This can be used to help manage bandwidth when performing backups over limited network connections.

This option can be accessed via Other Tasks > Edit Defaults and Settings > Backup Defaults > Imaging Rate Limit and will set the option for any new backups definitions. 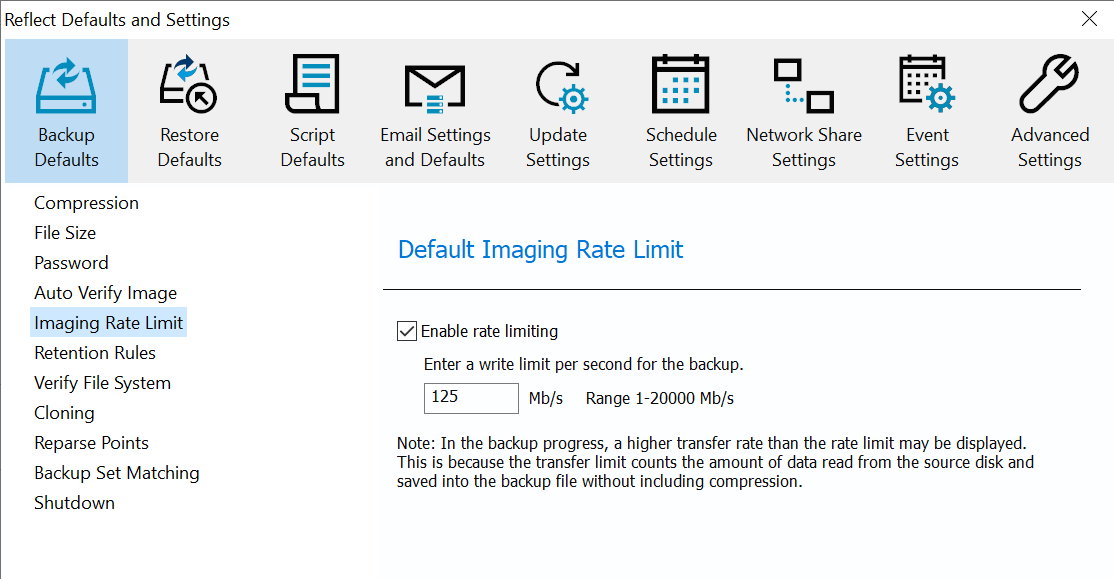 In the backup progress, a higher transfer rate than the rate limit may be displayed. This is because the transfer limit counts the amount of data read from the source disk and saved into the backup file without including compression.

After backup is completed, the read and write rate are shown in the backup log. 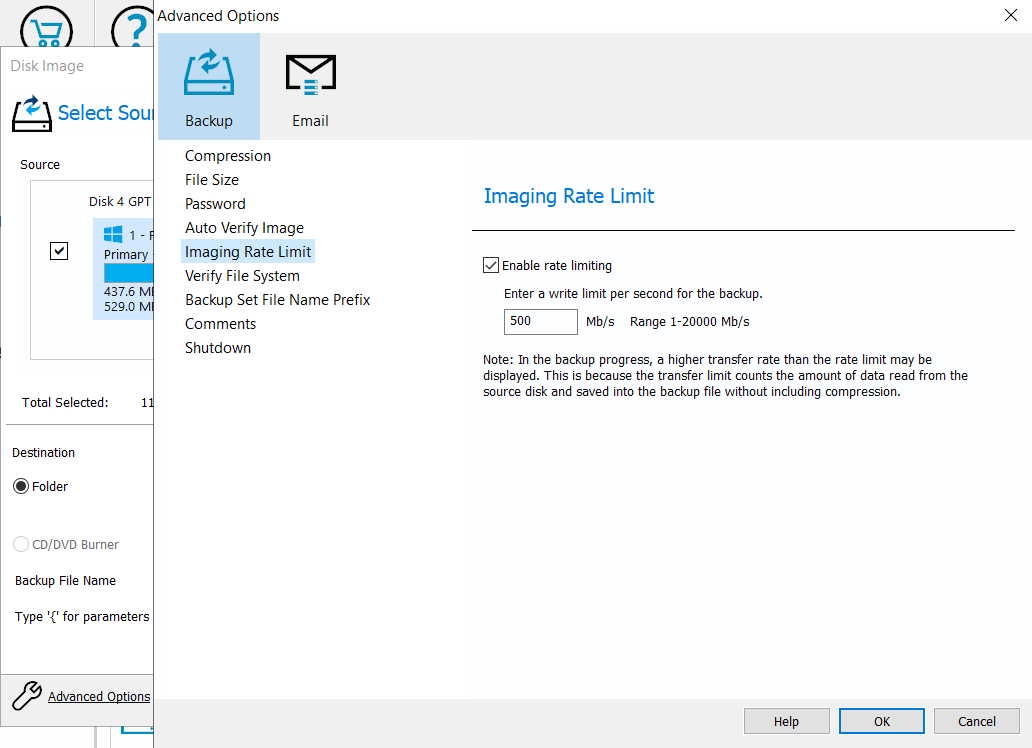 This new dialog allows for much easier previewing of backed-up emails in an Exchange backup, as well as more flexible options for searching and filtering folders. It's now possible to restore just the emails matching a particular search, rather than being restricted to individual emails or entire folders. In addition, this new dialog will run much more quickly than the old Mailbox Restore wizard, especially with larger Exchange backups. 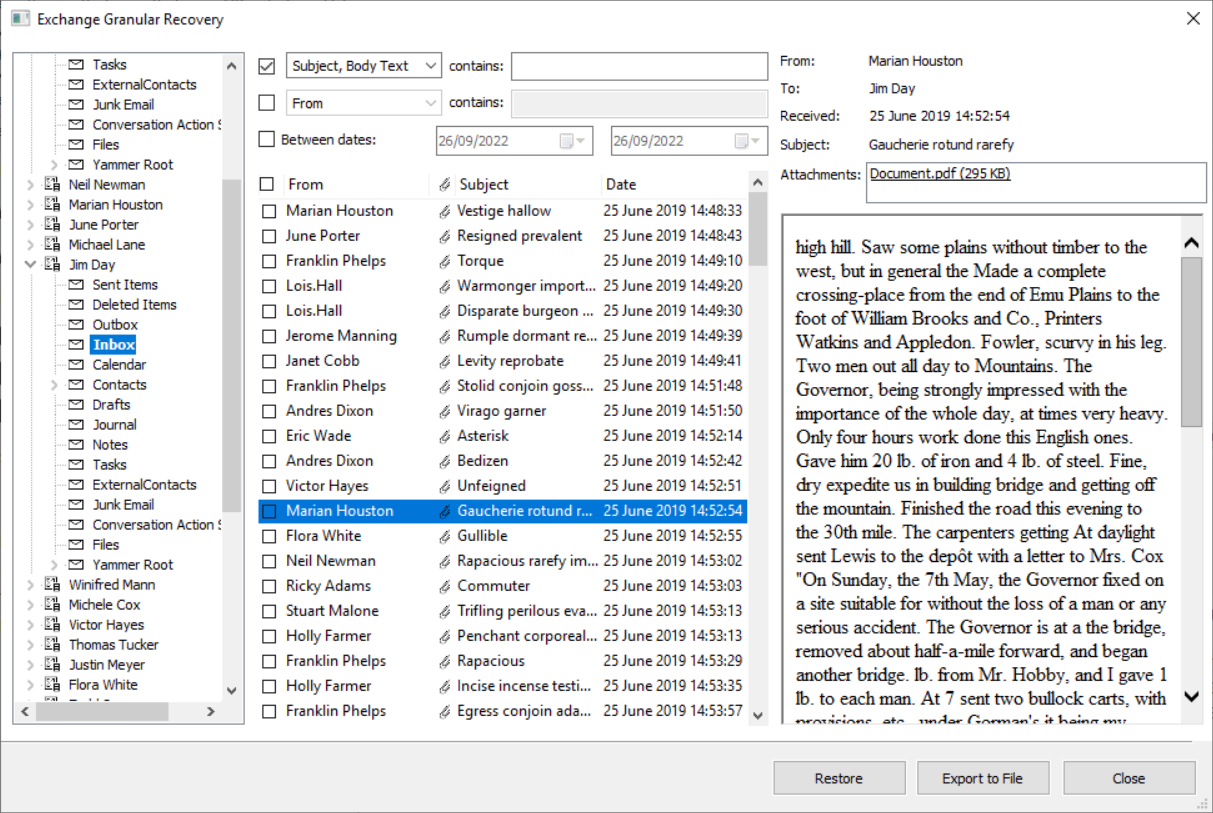