The scheduling options in Macrium Reflect are unchanged, however there are some important differences in the way scheduled tasks run.

All scheduled tasks, for all Windows Operating Systems including XP,  now run using the built-in Windows SYSTEM account. It is no-longer necessary to specify an Admin user account when creating a scheduled task and the option has been removed from the Macrium Reflect defaults.  A new lightweight process, 'ReflectMonitor.exe', runs in the background and is started at user login. This process monitors for running scheduled backups and creates a system tray icon in the notification area when a running scheduled backup is detected.  This overcomes two issues with Macrium Reflect v6 and earlier:

The ReflectMonitor progress window is identical to the backup run wizard in Macrium Reflect, so there's nothing new to be aware of here: 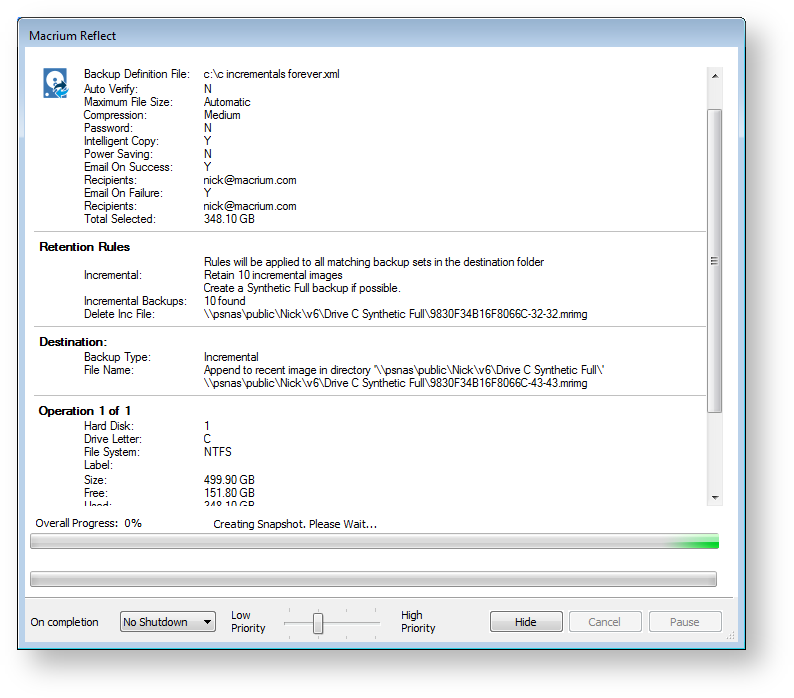 In the event of the notification icon not being visible you can show the monitor dialog by pressing hot keys 'Ctrl' + 'Alt' + 'M'. This always opens the dialog and shows the currently running backup or the status of the last backup if none is running.

The hot key can be configured or disabled in the Windows registry:

Note: Virtual key code must be a letter or a number key. The default 0x4D is letter 'M'