Using Macrium Reflect you can backup whole partitions or individual files and folders into a single compressed, mountable archive file. You can use this archive to restore exact images of the partitions on a hard disk so that you can easily upgrade your hard disk or recover your system if it breaks. You can also mount images as a virtual drive in Windows Explorer to easily recover Files and Folders using Copy and Paste.

Inside a PC, the operating system, applications and all your files need to be kept somewhere when the power is off. This permanent storage is usually a hard disk drive containing a spinning magnetic platter. The information on the platter is recorded and read by read-heads. So that the read-heads can store and find recorded data, the disk is split into blocks, usually of 512 bytes, which are numbered from the start to the end of the platter.

So that the operating system can use different file systems or provide multiple volumes (like the C: drive, D: drive and recovery area), it partitions these blocks into volumes (sometimes also called partitions). These volumes and their file systems are the first thing you'll see when you start Macrium Reflect.

Figure: Macrium Reflect showing the volumes and file systems on a system disk 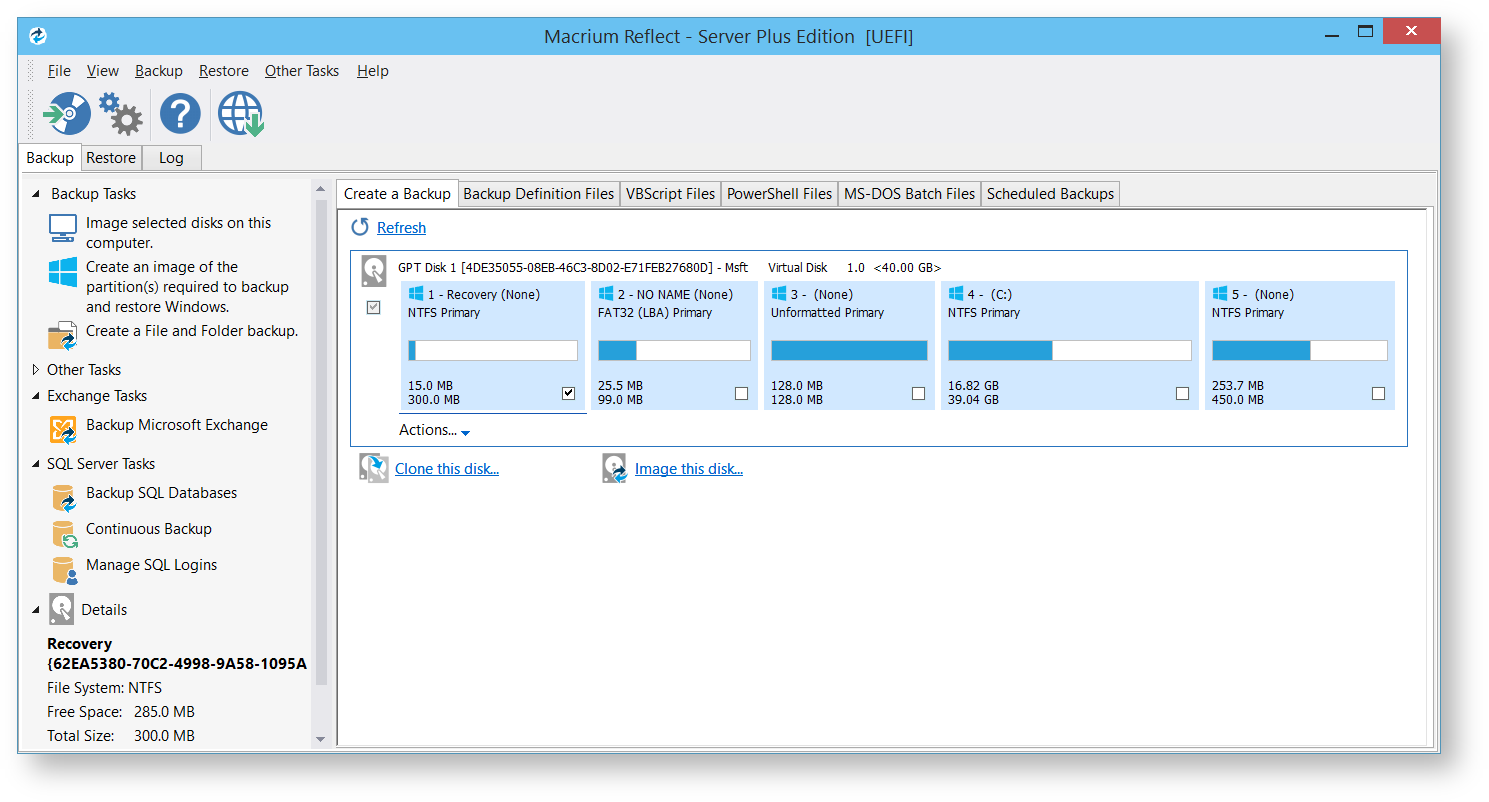 This lightweight version of Windows is called Windows Pre-installation Environment (also known as Windows PE or WinPE) and is provided by Microsoft. When you create rescue media, Macrium Reflect downloads Windows PE automatically for you and writes it to your media. It downloads just those components you need to rescue your system.

Macrium Reflect creates an accurate and reliable Image of a hard disk or the partitions on the disk. In the event of a partial or complete system loss, you can use this image to restore the entire disk, one or more partitions, or even individual files and folders.

During the imaging process, Macrium Reflect copies the contents of entire volumes including a reference to their physical location on the storage device to an image file (.mrimg). You would normally store the image file on local or network drives, or removable drives connected using USB or eSATA.

We strongly recommend that you create an image of your system at regular intervals.

When you image a volume for the first time it is referred to as a Full image. A Full image file contains all of the data stored in the volume. Macrium Reflect provides two alternative methods of backing up your data after the initial full image has been completed:

These methods significantly reduce the amount of disk space and time required to create image files and make it possible to restore your system from intermediate points within the backup chain.

To create a File and Folder backup, select the files and folders you want to backup, apply File and Folder filtering criteria to include and exclude files and/or folders, and Macrium Reflect creates a compressed backup file (.mrbak) that can be restored directly or browsed using Windows Explorer. Storing backups in a single file is beneficial because it can be compressed, encrypted and stored elsewhere with ease.

As you can for images, you can also create Differential, and Incremental file and folder backups to optimize backup speed and disk space requirements.

File and folder backups are ideal if you only wish to backup specific documents, photos or music, rather than your whole system.

With Macrium Reflect, you can clone your system disks to enable you to swap failed disks out of your system and get things back up and running again in minutes.

Cloning is often confused with imaging. The process is identical but instead of storing data to a file, it replicates volume contents and disk structures to an alternative device. When the cloning process is complete, the target disk is identical to the original and contains a duplicate of all volumes, files, operating systems and applications.

Note: Any data on the target disk prior to the cloning process will be erased.

Cloning a disk is particularly useful to upgrade an existing hard disk and in the event of a hard drive failure, you can simply replace the failed disk with a clone and have your system up and running again in minutes. However, cloning a disk is not an efficient way of backing up your data if it changes frequently because the clone will only contain one point in time as there is no 'Backup Chain' history that is available with Disk Images. Also, Disk Images can be compressed and saved to any location.

Macrium Reflect provides multiple  Backup Plan options to create backup cycles in days, weeks or months that allow you to pick when you want your backup definitions to run and whether they should be Full, Differential or Incremental backups. Scheduled backups can run independently of whether anyone is logged into the computer.

Options define whether to apply the retention rules to all the backups in the folder, whether to run the purge before backing up, and let you define a minimum amount of disk space to retain in gigabytes (GB) before automatically deleting the oldest backup sets in the destination folder to make space available for new backups.

Note: A backup set consists of a full backup and any Incrementals or Differentials with the same image ID. The image ID is the part underlined in the following example backup file name:  69B5FC3F39E0F9F5-00-00.mrimg

Macrium Reflect restores selected files and their folder structures from File and Folder backup .mrbak files. There are a number of ways to restore backups:

Macrium Reflect restores disks or their partitions exactly as they were when the backup was taken. The restore process also enables you to expand or shrink partitions if the restore target is a new disk and a different size to the original.

From the rescue environment you can launch Macrium ReDeploy to adapt the recovered Windows system to its new environment whether that is a virtual machine or a different computer. With Macrium Reflect ReDeploy, you can restore an image to a replacement computer or even create virtual hard drives to virtualize the machine, a technique sometimes called Physical to Virtual or P2V.

Macrium ReDeploy is now included in all paid editions of Macrium Reflect. This excludes the Free Edition and 30 day trials.