Unfortunately we have just become aware that since release v7.1.3147 on 17th April 2018 it was possible that Macrium Reflect could create corrupt and irreparable Incremental or Differential Image files. The problem occurs if the Macrium Changed Block Tracker (CBT) driver participates in the backup. By default, the CBT driver will participate in the second and subsequent Incremental Image of a backup set after a Windows *full system reboot. For Differential Images, CBT will participate if the Full Image, in the same backup set, was created in the same Windows session, i.e, no Windows *full system reboots between the Full & Diff (see Fast Start-Up note below). If an image is affected then it is unlikely that it can be mounted and browsed successfully and restore will result in a corrupt file system.

*Note: Windows 10 includes a default option called 'Fast Start-up'. If this is enabled then CBT may persist over a Windows normal Shutdown or Restart.

Technically, the problem arose from a misaligned data structure in the code and our testing prior to release didn't trigger this error.  We have since introduced more stringent tests that will prevent this type of error from occurring in the future.

Please be assured that integrity of your backups is our top priority. We sincerely and unreservedly apologise for this problem and have worked hard to repair this issue in the latest release.

What Images are affected?

The Following Installations and Backups are Not Affected

Macrium Site Manager clients are not affected. The agent install for Site Manager did not receive the problematic updates. If you are running standalone Macrium Reflect installs with Site Manager then please check each install.

File and Folder backups are not affected.

Images that may be affected include Incremental and *Differential Images that use the CBT driver to participate in the backup.

*Differential images will only use CBT if the image being appended to, the Full image, was created in the same Windows session.
i.e, there have been no Windows  full system reboots since the Full image was created.  (see Fast Start-Up note above).

The words 'CBT init Success' and 'Searching for NTFS meta data' will be seen in the Image log:

The build number of Macrium Reflect will also be shown in the footer of the log.

If you have any doubt, then you can mount the image file and run chkdsk from and elevated command prompt. Use the mounted drive letter as the chkdsk target as shown below: 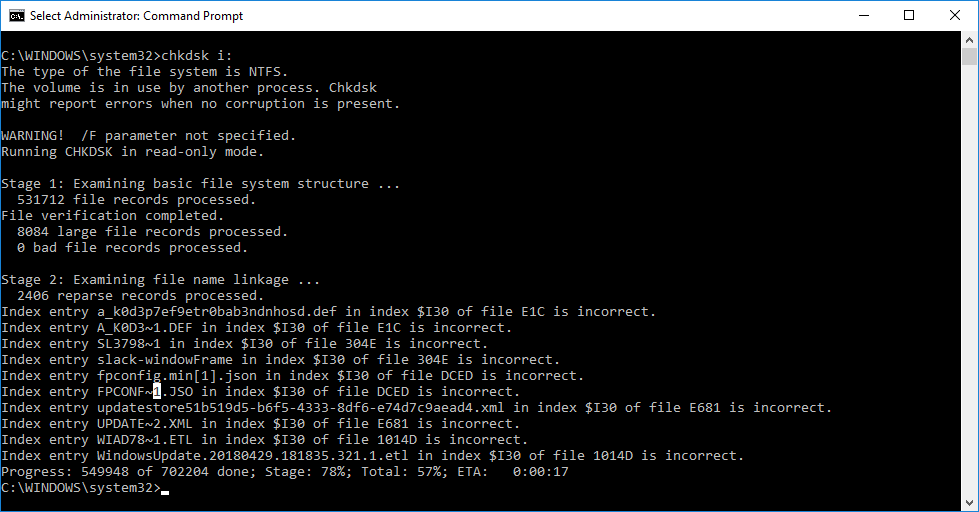 The above example shows typical corruption of the NTFS file system.

It's possible that non-critical file system errors have been carried over from the source file system.  In this case your image is fine

Note:  It's possible for good images to report minor and innocuous errors when using 'chkdsk'. These errors will have been transferred from the live file system but don't cause a problem with the image.  If you see only the following error then there is no problem:

This is nothing to worry about.

Note: Corrupt Image files will verify successfully using the Macrium Reflect verification function. The nature of this error is that key data was omitted from the image, the data that was backed up is not itself corrupt..
Note: The backup set chain is not broken. This means that non CBT Incrementals and Differentials created after corrupt files will be OK to browse and restore.

What do I do with my corrupt Images?

These image files should not be restored and may be deleted by using the Delete functionality in Reflect. Deleting Incremental Images will also delete dependant Images created after the corrupt file and this may not be desirable.

Note: The next Incremental or Differential in the same backup set created with v7.1.3196 or later will not be affected. So, if you are running an Incrementals Forever backup strategy you can continue and any corrupt Incrementals will eventually be consolidated successfully into the Full without any further loss of data.